I’ve been babywearing for 4 years now. It’s a decent stint of time; a little over 12% of my life! In that time I’ve tried many wraps. Thick wraps, thin wraps, easy care and luxury blends, no pattern and highly patterned. I’ve been around the wrapping block, you might say.

Having tried such a variety of wraps, these days not many of them seem unusual. But this wrap. Ah, this wrap. I knew Tranquility was a bit special from the moment I opened the box.

Tranquility has truly amazingly thick linen threads. Take a good look at the close-up photos. Those cotton threads may seem oddly delicate, but they’re a normal size. It’s the linen which is different: generous, substantial, super-sized! And in loom state, that linen has the most incredible shine. It’s like liquid gold, shimmering and almost glowing. It’s captivating.

This same linen is also stiff, rough and not a little intimidating in loom state. So, how does a wash, dry and iron change it? Well, Tranquility’s linen continues to behave unusually in that it becomes very fluffy and starts to pill immediately. I found the pilling (and shedding of the pilling) continued for around a week as I broke it in. The pilling diminished the shine considerably, but as the linen broke in (with the fibres smoothing out) it regained most of its shimmer.

The linen softened a little after Tranquility’s first wash and iron, but was still pretty rough. I expected breaking in this wrap to be quite a challenge and was somewhat daunted – but was then pleasantly surprised to find that it actually look much less work than expected. And once broken in, the linen transformed! Where it was initially stiff and rough, Tranquility became soft, floppy and malleable – lovely to handle and enjoyable to wrap with.

So what about the rest of the wrapping qualities? Well, let’s start with the grip. Tranquility is fascinating: it’s fairly textured, but not because the weave is inherently textured. Instead, it’s because of the difference between the thinner cotton threads and the super thick linen threads. It brought to mind topographical relief maps – if those had texture, I think they would feel like Tranquility, with ‘high’ and ‘low’ sections. Because of this unique type of texture Tranquility isn’t actually all that grippy (I’d rate the grip as medium). Particularly with the linen broken in, it’s got decent glide – the second pass of a DH was absolutely no problem. 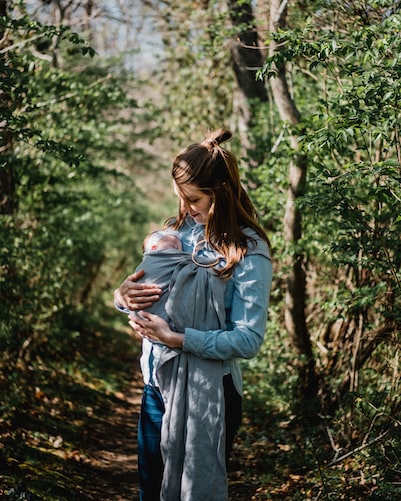 There’s no getting away from the fact that this is a thick, thick wrap. Some people will love that, some will loathe it. However, for all the wrappers out there who run a mile from thick (and I’m normally one of them), I’ll say this: it doesn’t wrap like its gsm. Once broken in, the bunched passes (although still sizeable) are not the treetrunks I’d expected. And you don’t need to warm-up in preparation for a wrapping workout; Tranquility is malleable and really very nice to use. In return for braving the 379gsm linen, you get fantastic support. Tranquility handled my preschooler with consummate ease.

The linen is solid, but the weave is pretty airy and has some nice movement. Overall I wouldn’t call this a wrap with stretch or bounce, but it has enough give to avoid feeling rock solid on your shoulders. I half expected Tranquility to be pull-prone, but dragging it around a field with little caution generated only 2 small, easily fixed pulls. This sturdy wrap isn’t one you need to baby: throw your worst at it, Tranquility can take it.

Having started with Tranquility’s beautiful shine, it’s now time to return for a final overview of its design. The colour is one of those fascinating combinations which changes with distance: up close you can see the lovely gold of the linen juxtaposed against black and white cotton, but from further away these colours all blend to a denim-blue tone. The pattern is organic and full of movement. To some people it’s a little like snakeskin, but it reminded me of ripples on water. 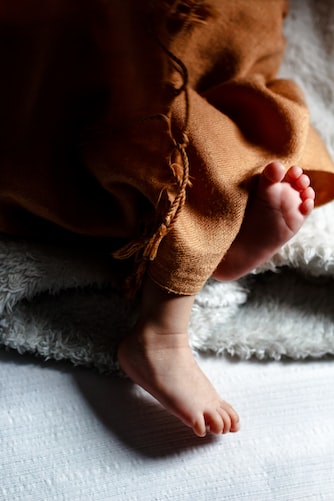 So, final recommendations. Do you have a small baby? You’ll probably want to wait a few months before taking the plunge. Older baby? You might find Tranquility a little bulky on their legs, but not too bad. Toddler or preschooler? GO GET THIS WRAP. Honestly, it’s lovely to use, beautiful to look at, an easy-care blend and just so, so supportive. I think this would make a wonderful RS and I’m terribly tempted to get one for myself. It was also wonderful in base size, and I’d have no hesitation in recommending it as a shorty. Whatever size you go for, try it if you can. I rather suspect wrappers will be talking about Tranquility for some time to come.

This site uses Akismet to reduce spam. Learn how your comment data is processed.

We use cookies to ensure that we give you the best experience on our website. If you continue to use this site we will assume that you are happy with it.Ok